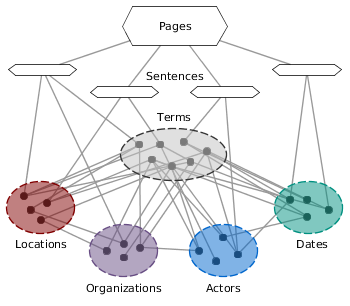 Real world events, such as historic incidents, typically contain both spatial and temporal aspects and involve a specicific group of persons. This is often reflected in the descriptions of events in textual sources, which contain mentions of named entities and dates. Given a large collection of documents such as news articles, however, such descriptions may be spread  across  multiple  documents. LOAD is a graph-based model that supports browsing, extracting and summarizing real world events in such large collections of unstructured text based on named entities: Locations, Organizations, Actors and Dates. Similar to a knowledge base, the graph represents the implicit connections between related entities and assigns to them a strength based on the overall textual distances of the entities. Although the type of connection itself is not part of the model, the addition of terms, sentences and documents to the model allows its use as an index structure for the efficient retrieval of relevant instances of entity co-occurrences to support traditional methods of event extraction and analysis. Thus, the LOAD model not only enables near real-time retrieval of information from the underlying document collection, but also provides a comprehensive framework for browsing, exploring and summarizing event data. For further details, please refer to the original publication.

We recently added a browser-based online interface called EVELIN that can be used to browse LOAD networks of the English Wikipedia (EVELIN wiki) or a collection of English news articles from May 2016 to November 2016 (EVELIN news).

In the following, we provide a number of resources for the construction of a LOAD graph from document collections that are already annotated for named entities, as well as LOAD graphs for the text of the English Wikipedia.

LOAD graphs of the English Wikipedia

Here, we provide the LOAD graphs that we constructed from the English Wikipedia (Wikipedia dumps of May 2016), based on annotations of named entities in the unstructured text. We provide two versions of the graph, derived from different schemes for annotating the named entities. The first version is conceptually very similar to the originally published version and uses for annotations the Stanford NER (persons, locations and organizations) and Heideltime (dates) with no disambiguation. The second version is closer to a knowledge base. While we still annotated dates with Heideltime, persons, locations and organizations are annotated through Wikidata and Wikipedia links, which creates a highly accurate result and includes automatic disambiguation and entity linking to Wikidata.

Please note that the LOAD graphs are large. For working with the in-memory representation we recommend using a machine with at least 128 GB or memory. To support application scenarios with available memory, we also include code for importing the LOAD graphs in a MongoDB (see code linked below).

For applications in NLP, we also provide the entire content for the sets of sentences that appear as nodes in the LOAD graphs. Due to the size, these are separate downloads. They are supplied in JSON format and can thus easily be imported in a MongoDB or another database. Please be aware that this is a large portion of the English Wikipedia content and the respective licenses thus apply (i.e. creative commons).

This version is conceptually almost identical to the originally published version of the LOAD network. It uses the unstructured text of the entire English Wikipedia as input (dump of 2016-05-01). Named entities were annotated with Stanford NER (persons, locations and organizations) and Heideltime (dates). Dates were normalized but no disambiguation was performed for the entities. In contrast to the original LOAD graph, this version also includes set-internal edges (e.g. between two persons or between two locations). For a brief overview of the data format, please refer to the included file metaData.txt. If you require a representation of the data as an edge list, please refer to the code linked below, which can be used to import the graph in a MongoDB.

This version of the LOAD graph was constructed from the unstructured text of the English Wikipedia (dump of 2016-05-01). Dates were annotated and normalized by Heideltime. All other named entities were extracted by the following process:

All entities in the graph are thus disambiguated and linked to Wikidata as a knowledge base. Nodes are not labelled with the names of the entity, but with a Wikidata ID. The graph also includes set-internal edges (e.g. between two persons or between two locations). For a brief overview of the data format, please refer to the included file metaData.txt. We also include a version of the data in tab-separated edge and node lists that include Wikidata entity identifiers, Wikidata labels and the full sentence information. If you require a representation of the data in a data base, please refer to the code linked below, which can be used for importing the graph in a MongoDB.

In addition to the large, comprehensive LOAD graphs, we also provide a smaller graph that can be used on systems with less resources or for testing purposes. This version of the LOAD graph was constructed from a subset of the English Wikipedia. Specifically, we included only pages from the English Wikipedia (dump of 2016-05-01) that are located in the subtree of the category American Civil War at a depth of at most 3. In addition to the LOAD data itself, we included the text of both sentences and articles as JSON MongoDB exports that are formatted to work directly with the LOAD network (i.e. for sentence and page prediction tasks). In all other respects, the construction of this graph is identical to the large Wikidata + Heideltime version.

To allow the creation of LOAD networks from any annotated source of text, we provide our implementation of the LOAD generation algorithm. Additionaly, we also include a set of tools that can be used to transfer the internally used graph representation to an edge list format in a MongoDB (the code can easily be adapted to write an edge list to a file or any graph database instead). A console-based query interface for the graph is also included.

The LOAD generation code is designed to be able to use the output of any named entity annotation tool as input. To this end, input data should be stored in a MongoDB from which the program can access the documents. The required data includes

Implementation was done in Java (JVM version 7 or higher required) and uses the Java Snowball implementation of the porter stemmer, the Java mongoDB driver and the trove library. For additional information, please refer to the enclosed readme.txt file.

Please note that this is a fully working yet preliminary version of the code that is kept simple but requires some basic knowledge of Java. A GitHub repository for the code is in the process of being set up and thus forthcoming. Support for further databases and applications are likely going to be added in the future. If you would like to be notified once this is live, or if you have any questions, please get in touch.

To allow the more versatile and interactive creation of LOAD networks from within the R programming framework, an R script version of the code was implemented in a software project by Katja Hauser. Unlike the Java version, it is not parallelized and scales much worse on large document collections, but is easier to use and adapt, and can be run on arbitrary documents as input (that is, it does not require entity annotation ahead of time). To create annotations, the script can either tie directly into entity annotation functionality in R, or be fed with a custom gazetteer for entity recognition. For further information, refer to the enclosed README.txt file.

Please note that this code was developed during a student project and is not actively maintained. As of January 2021, it is still fully functional, but future changes to R package dependencies may cause issues. If this does happen, please get in touch to let us know.

For the sake of comparability, we also provide the English Wikipedia LOAD graph that was used in the original publication (annotated with Stanford NER and Heideltime). We do not recommend that you download this version for any other purpose, as the new LOAD graphs (linked above) are cleaner and more comprehensive.

To facilitate browsing in the original LOAD graph, we provide an executable version of a console-based query interface written in Java. For working with the new versions of the LOAD graph, we recommend that you use the updated code linked above, which also contains a query interface with improved functionality. Please note that you need a lot of memory to run the program, so using a machine with less than 128GB physical memory is likely not going to work. To run the program, simply download the graph and extract it to any folder. Then download the jar file and run it by executing

where <path to graph folder> is the path to the directory that contains the graph. Using relative paths may not work depending on your JVM, we therefore recommend using the absolute path. Instructions on using the program will be displayed after it launches. Note that reading the graph into memory takes approximately 20 minutes. Java 7 or higher is required to run the program.

We also provide the evaluation data of hand-annotated historic events and dates of death that was used in the publication. If you use the data, please consider citing us. The data is stored in plain, tab-separated csv files.

The paper that originally describes the model was presented at SIGIR '16. For your convenience, we also provide a pre-print here. If you use either the method or the data, please consider citing us as:

If you have any feedback or questions, we are happy to help. If you are using our model or implementation, we'd love to hear about it so let us know! Please contact Andreas Spitz. [email] [web]